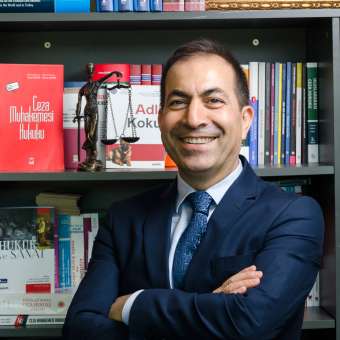 Professor, Dean of Faculty of Law

Prof. Dr. Dr. h. c. Yener Ünver is the founding Dean of the Faculty of Law at Özyeğin University, and has been serving as the dean since May 5, 2011. Prof. Dr. Dr. h. c. Yener Ünver has also been serving as a member of the Senate and the Executive Board at Özyeğin University, as well as several editorial boards since May 5, 2011. He is also the Founding Director and Chairman of the Executive Board at the Özyeğin German Law Research Center (Forschungszentrum für deutsches Recht –FZfDR-), and a member of the Enrollment Quality Commission at Özyeğin University.

In 2006, he served as a member of the Disciplinary Committee at the TFF for 5 months. From 2008 to 2011, he was as a member of the Arbitration Board at the Turkish Football Federation (as a judge at the Court of Arbitration for Sport). On September 21, 2011, Prof. Dr. Dr. h. c. Ünver was awarded the honorary Doctor of Laws (honora the causa) degree by Grigol Robakidze University -Alma Mater in Tbilisi, Georgia.

Presently, Prof. Dr. Dr. h. c. Ünver is a member of the DAAD Association. He is also a member of the Medical Law Association (Istanbul / Turkey) and the World Association for Medical Law (USA). He is a member of the Turkish Criminal Law Association where he served as the vice president until March 2013. He is the chief editor of the Suç ve Ceza (Crime and Punishment) Journal which has been published since 2008 by the Turkish Criminal Law Association. In March 2010, he was elected as a member to the European Academy of Sciences and Arts, where he is still serving as a member. Prof. Dr. Dr. h. c. Yener Ünver was honored with the “Certificate and Commemorative Medal of Stefan Bobchev” pursuant to the mutual decision of the University of National and World Economy and its Inter-University Center for Studies of Roman Law and Romanistic Tradition in Sofia, Bulgaria on October 27, 2014.

Since April 2014, Prof. Dr. Dr. h. c. Ünver has been attending the ongoing NSU murder trial (Neo-Nazi Murders of Turkish businessmen) in Munich, Germany as an observer on behalf of the Ministry of Foreign Affairs of the Republic of Turkey. He served as a member of the Advisory Board at the Health Law Application and Research Center at Dokuz Eylül University for three years from April 2015 through May 2018. He is also a member of the Editorial Board at the Medicine Law & Society journal (ISSN 2463-7955).

He is a member of the international editorial board of the online journal “Kriminalpolitische Zeitschrift”(www.kripoz.de.), published in Germany, which accepts manuscripts both in English and in German.

Since August 2017 he has been a member of the International Academy of Comparative Law (Académie Internationale de Droit Comparé), which was founded in The Hague in 1924 and is headquartered in Paris.

As of 12.05.2019 "Turkey Cyber ​​Security Cluster University Representative" in his capacity as representative of Özyeğin University is conducting the mission.

As of 26.05.2019, He is a member of the Journal Editorial Board (Comitato Editoriale) of the University of Salerno of Italy (Uniersità Degli Studi di Salerno).(www.rivistagiuridica.unisa.it).

As of 17 February 2020, Professor Ünver has become a member of Board of Editors of Yur-Vak Journal’s English and Russian editions that publishes basic results of PhD thesis and academic degrees and that focuses on scientific degrees.

As of January 2021, Prof. Yener Unver is a member of Justice Academy of Turkey- "Scientific Committee on Justification of the Turkish Judicial Decisions".

He was elected as the Deputy Chairman of the National Aviation Academy High Certification Commission Doctorate Council before the Presidency of the Republic of Azerbaijan with the 09-R Protocol Decision dated 24.09.2021.